You are here:
Air to Air Heat PumpAll Case Studies 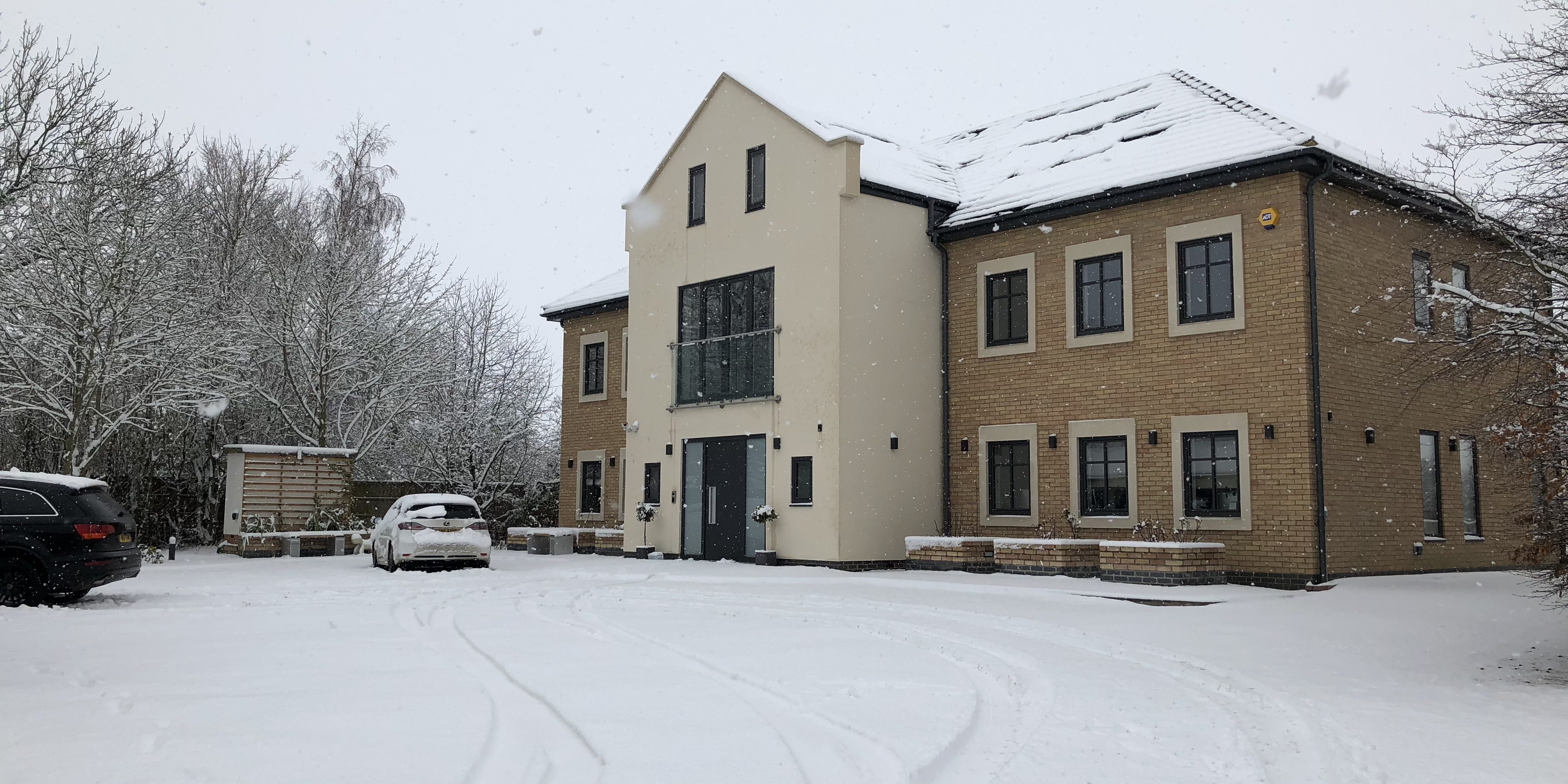 (Case study written by Rebecca Foster from Build It)

When Vincent Haines and his wife Jacqueline relocated from Kent to Cambridgeshire over a decade ago, the spacious plot surrounding their new home was one of the major draws. In addition to far-reaching views towards the historic city of Ely, the site came with just over 2.4 acres of land, offering plenty of scope for the couple’s self build ambitions to take shape in the future. Back then, having recently completed an extension project on their house in Kent, the pair weren’t actively looking to move. When a friend called them to let them know about a property with a large plot of land being sold in Cambridgeshire; however, their interest was piqued. “At that point we were searching for schools for our two-year-old daughter, and there were lots of good options in this area,” says Vincent. “Plus, ever since Jacqueline trained as an architect, it’s always been her dream to design and construct her own house.” Fast forward almost 10 years, and the couple were finally ready to bring their self build dreams to fruition.

In the intervening period, Jacqueline had established her own company, Digio Design & Construction, so the pair were in an ideal position to kickstart their project. “When the time was right, we put some fencing around our existing home. We were left with a space of about 2.1 acres with a nice driveway leading down to where the new dwelling would be, at the back of the plot.”

Starting The Process
For Jacqueline and Vincent, the first step was to settle on a suitable design – which proved a challenging process. “It’s incredible the amount of different styles we went through,” says Vincent. “We wanted something that would fit in with the area; we started off with a timber frame barn-style house.” However, unsure that this scheme would get the go ahead from their local planning department, the couple decided to go back to the drawing board at the last minute. “There’s a neo-Georgian property just opposite our site. We thought if someone had obtained permission to build that, it should make our journey a little easier in terms of the planning process,” says Vincent. “Plus, Jacqueline prefers traditional brick and block construction, which suits this style. We both like the solidity it offers, and we felt that it would ultimately give us more control over the layout we wanted to create.” Unfortunately for the couple, the planning stage didn’t turn out to be smooth sailing. After submitting their scheme to the local council, the neo-Georgian dwelling was rejected on the grounds it was too large. “It was a long process, but in the end we took it to appeal and won,” says Vincent. “The funny thing is, the design we submitted was much bigger than we thought we’d get permission for – we’d anticipated the planners would knock us down 20% on size. We thought we’d go as large as we could and end up with a reasonably-sized property.” Instead of the 400m2 house the couple had envisioned gaining consent for, going through the appeal process meant they actually obtained permission to develop a 570m2 dwelling. With planning consent in place, the couple set about finding a suitable mortgage to finance their project. “We went to a broker who basically combined the value of the plot with the existing property,” says Vincent. “In the end, only one company came back with an offer – but it was the right one and it was fantastic.”

Thanks to Jacqueline’s industry expertise, hiring professionals to carry out the build turned out to be a fairly simple process. Keen to use local trades, the couple predominantly hired firms that Jacqueline had worked with before. “In cases where we had to bring new people in, we’d simply invite them over for a chat,” says Vincent. “At that point, if we got a positive or a negative vibe from them, we’d base our decision on that.” The couple handled the project management aspect of the scheme themselves. “It was a team effort, but Jacqueline took care of most of it,” says Vincent. “Her experience really helped us through the whole process – especially when it came to ordering materials. As a result of her calculations there was hardly any wastage on site.” Once the project started on site it reached wind and watertight stage fairly quickly. In fact, the groundworks was one of the most enjoyable parts of the process for Vincent. “Getting the concrete in the ground for the foundations was really exciting,” he says. “The planning and the politics are all behind you and it’s finally possible to see things moving ahead.” The couple continued to live in their original property throughout the main construction phase, which meant they were able to keep a close eye on progress. “Seeing the house take shape was fun,” says Vincent. “Every day we’d both go to work, and then by the time we got back a little more would have been done.” A flexible approach to the build schedule also allowed the pair to keep things running smoothly on site. “Sometimes there were delays if certain trades had emergency jobs to get to. If that was the case, we weighed it up and often ended up saying it would be better if they just came back the following week,” says Vincent. “It was all about being flexible, and because of Jacqueline’s experience and expertise she was able to build a certain amount of leeway into our plan.” For Vincent, finishing off the interiors turned out to be the most frustrating part – particularly as the family moved in before this stage was completed. “We didn’t even have a kitchen – we were making all our meals with a microwave and a mini induction hob!” he says. “Living conditions were pretty unpleasant; there was dust everywhere. It was really rewarding when everything was finished and we could finally peel the protective films off things and see what we’d achieved.”

Energy-conscious
As well as creating a spacious family home suitable for entertaining guests, Jacqueline and Vincent were keen to develop a property that was going to be energy-efficient. From the outset, Vincent knew he wanted to incorporate renewable technologies to provide the home’s electricity and power the central heating system. “I spoke to the experts early on and they recommended that we take a fabric-first approach to the project by making the house as airtight as possible,” says Vincent. “That’s why we specified tripleglazed windows and packed in a 100mm-thick layer of insulation.” A selection of renewable appliances has been installed, including 43 solar photovoltaic panels. Two air source heat pumps have been fitted to power the underfloor heating setup and provide hot water. “We opted to have two units partly because of the large size of the house,” says Vincent. “It also means that when there’s low demand on the system, like during summer when we only need the hot water, just one of the appliances needs to be running. It’s turned out to be excellent value for money.” The couple have also incorporated a mechanical ventilation and heat recovery system to extract stale air and bring a fresh supply into the house.

When it came to the interiors, Vincent and Jacqueline had their hearts set on a sleek, uncluttered look. “We wanted something really modern,” says Vincent. The walls have been painted in white and grey throughout, forming a crisp backdrop for the eye-catching pieces of artwork the couple have hung on the walls. “We’ve got some huge Roy Lichtenstein prints in the hallway. One of them is on the doors to where we keep all the cable equipment, and it hides all of that stuff away. It looks really funky.” A striking split staircase acts as an additional focal point in the spacious reception zone. On the ground floor, pale porcelain tiles work in harmony with the white walls, while upstairs a whitewashed Danish pine floor covering has been used. “On the first storey, I wanted something that felt a bit warmer underfoot,” says Vincent. “For the downstairs area though, the tiles are great. They’re hardwearing, easy to clean and they hold onto warmth from the underfloor heating very well.” In the kitchen, stylish grey units continue the contemporary decorative theme. “We found that walnut works very nicely with this particular shade, so we’ve incorporated doors made from that type of wood throughout the house,” says Vincent. “A lot of the furniture we picked out is the same timber species, so we’ve kept the colour theme really consistent in all of the rooms.”

Favourite Features
While the couple are delighted with each of the different spaces in their new home, for Vincent, one zone stands out from the rest. “I love movies – they’re my vice in life. A dedicated cinema room was therefore incorporated into the house plans right from the very start of the project,” he says. Decorated in a plush, 1960s style, this soundproofed space has gone down as a massive hit with friends and family, too. “People come over to watch films and they often end up saying it’s better than our local cinema,” he says. Vincent worked closely with the audio-visual team at Pyramid Group to craft the perfect space. In addition to the 140″ screen and reclining electric seats, a total of 17 speakers have been fitted. “We sat down and together came up with ideas for the best mix of components to go into the system. Because of the shape of the roof, Pyramid went back to Dolby in America and asked how to tweak the setup to make it work as well as it possibly could,” says Vincent. In the end, this carefully-considered approach paid off in spades, and the zone scooped the CEDIA award for the Best Home Cinema £40,000-£120,000 in Europe. “The judging panel said it was technically perfect and that there wasn’t anything they could do to make the sound better. It’s such an achievement.”

Now that their self build is complete, Vincent and Jaqueline have fully relished the opportunity to step back and appreciate everything they achieved on their home building project. “It’s been great to sit down, relax and enjoy the house,” says Vincent. “When the terrace went down and the landscaping was completed, that really capped it off for us. Being able to sit outside and just look at our new property really brings home the enormity of what we’ve accomplished.” The couple are already keen to tackle another self build in the future. “It’s such a positive experience, you get to specify exactly the abode you want,” says Vincent. “This journey has given us a fantastic house for family life and a great space for entertaining. We’re proud of what we’ve done, and we’re enjoying the result.”