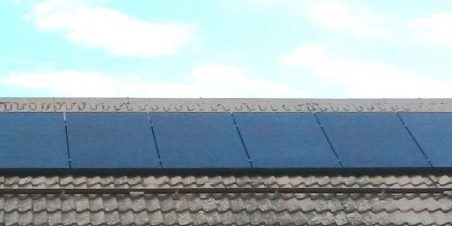 Details:
We were contacted by Steve and Vicky with an interest in renewable heating for their bungalow in Ely, Cambridgeshire. Roly visited the customers home to discuss their requirements and offer different solutions. Steve had a keen interest in Solar panels to contribute towards their high electricity requirements. Roly carried out a site survey and calculated that 28 panels could be installed producing up to 6135 Kilowatt hours per annum.

Roly came back to the office and worked out that if Steve and Vicky had the solar panels installed, they would earn approximately £800 from the Feed-In Tariff (FIT) per annum. With other benefits such as electricity savings and energy exported to the grid, our customers will be approximately £1,375 better of per year. Steve and Vicky would have a payback period of just 7 years and will carry on earning from the FIT for another 13 years.

Steve and Vicky were delighted with these figures and after reading customer case studies on our website, they decided they would go ahead with the installation and were also keen to learn more about Biomass Boilers and the benefits of having one installed. Roly visited the house again and took along an OkoFEN brochure and explained how the system works. We have the OkoFEN Pellemetic Biomass Boiler in our showroom in Sutton and the customers were invited to come and look at the system to give them a better idea of how big the boiler is and how much room they would need.

Mike and Liam our Apprentice worked together on this project and installed the 28 panels on the bungalow roof over four days. The inverters are located in the roof space. Following the Solar installation, Mike installed a Solar iBoost, which uses the energy the customer is generating from their PV array which isn’t otherwise being used in the home to heat the water in the tank for free.

Following the installation, it was noticed that there was a tree blocking the direct sunlight over a few of the panels, Steve has had these cut back to maximise the use of the panels.

The installation looks great and the customers are overjoyed with the new system and also their reduced energy bills.

We look forward to going back to the property within the next few weeks to install the OkoFEN Biomass Boiler.

Testimonial:
“We have been dealing with Roly in regards to having the solar panels fitted. He has led us through the process, from the initial enquiry through to site survey and completion.

The panels look good on the roof and we have been enjoying the hot water provided by the sun via the iBoost straight away and it is great watching the generating meter showing the electricity coming in.

Thanks for your hard work and we look forward to the same service when the OkoFEN is fitted”.