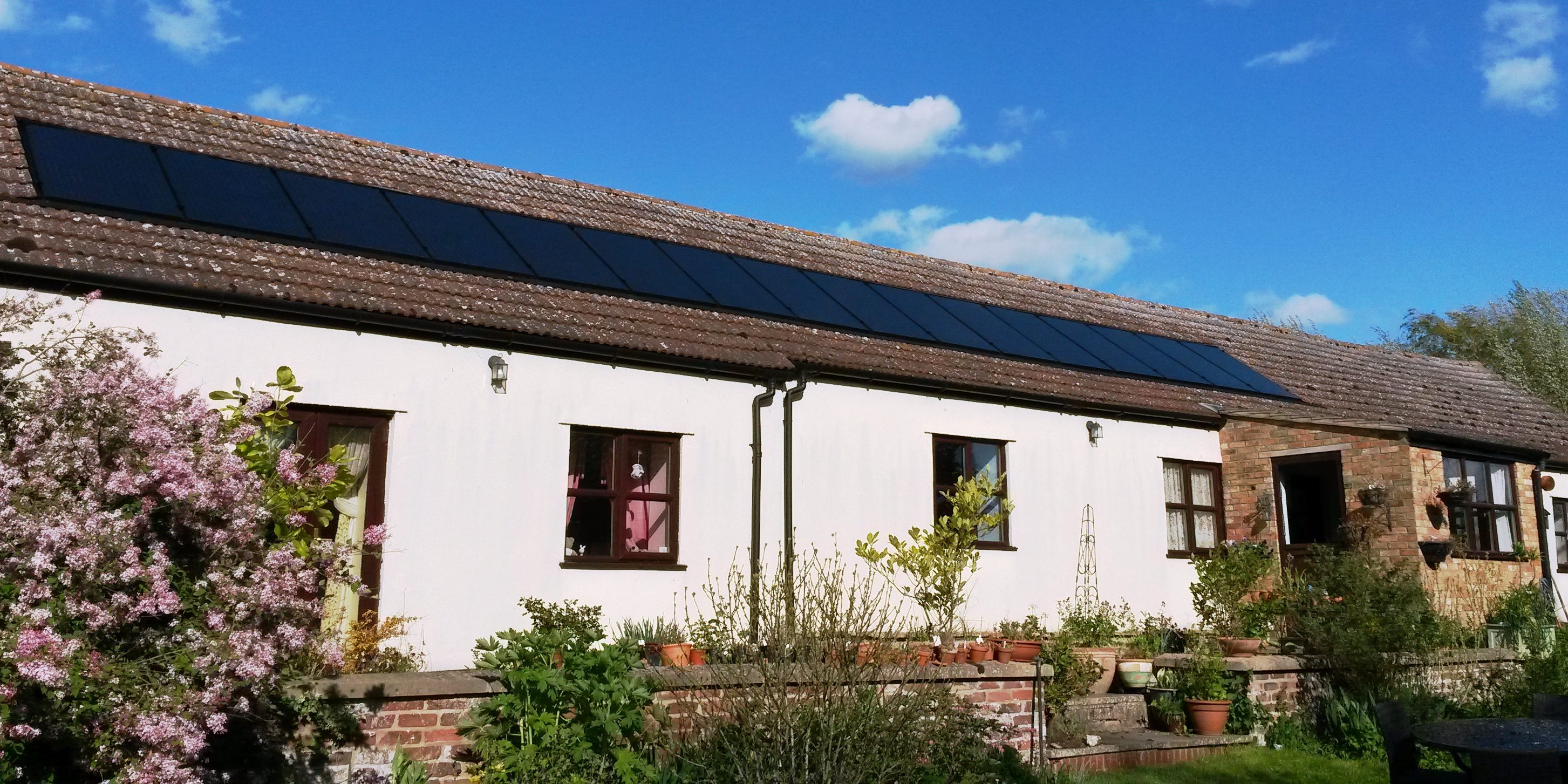 Project details:
Existing customers Andrew and Kathryn gave us a call to find out the suitability of a solar Photovoltaic (PV) installation on the roof of their garage. Roly visited the property in Mepal, Cambridgeshire to carry out a site survey and went though the different options available.

Upon arriving at the family home, Andrew explained that Kathryn wasn’t fond of a solar installation but was happy to explore different ideas. Roly questioned the possibility of installing a solar array on the roof of the bungalow which had a larger space and was more south facing than the garage. The more south facing the panels are, the more renewable electricity produced.

Roly explained that the solar panels can be installed on top of the roof titles as traditionally seen or installed ‘in-roof’. In-roof systems are becoming increasingly popular on new builds but they are just as suitable for retrofit installations. In-roof panels are designed to fit seamlessly into a roof like normal roof tiles. Unlike conventional PV panels, the tiles form part of the roof itself. Kathryn and Andrew liked the in-roof option and were keen to explore this further.

Following the site visit, Roly sent Kathryn and Andrew a design and quote for an in-roof solar system using Sunsolar Black Mono Crystalline Panels which carry a 25 Year Manufacturers product warranty and a 25 Year Linear performance guarantee. Kathryn and Andrew were pleased with the information received and were happy to place an order with us.

Our Engineers removed approximately 1,200 tiles to make room for the solar panels, the installation took our engineers just four days to install. Following the installation Mike, our in house electrician installed a Solar iBoost which diverts spare energy from the PV array into domestic hot water for further savings.

Kathryn and Andrew are delighted with their Solar PV installation, the panels fit in really well and look almost like Velux windows.

“We wanted to reduce our dependency on fossil fuels and as The Barn was only on mains electricity we thought that we should look into the feasibility of installing Solar Panels. We called into Eco Installers’ showroom in Sutton, Ely to just make initial enquires with a local installer who we have used for other smaller work. We had a quote from a national installer and had used the government backed web sites to determine possible costs and payback periods.

Whilst discussing the system I (Kathryn) did have to confess that I really did not like the majority of solar panels I have seen on roofs and did not want them on the house roof but would agree to them on the garage.

When in the showroom, Roly pointed out that the table we were sitting at was made from a Solar PV panel and this did not look at all like the ones I was talking about but was a black panel which did look much better than others that I had seen. I also did not like the panels sitting on the tiles of the roof but it was explained that it was possible to position panels recessed into the roof, by removing the tiles and fixing trays onto the rafters and then the panels would fit in the trays. I was feeling a bit happier so Andrew and I arranged for a home visit.

It soon became apparent that the garage was not ideal position or construction and would require the cables from the solar panels to be put in a trench to connect to the grid at the electricity meter in The Barn. That would involve a significant increase in the installation cost. We asked for a quotation for installing the panels on the garage and on the main roof with the panels recessed.

We appreciated the advice given by Roly and Mike and their patience shown while we came to an acceptable solution. In the end we agreed that the best option was to fit the panels to the main roof with all 16 panels fitted in portrait orientation and in a single string.

Installation went ahead as planned but was interrupted by high winds, the team worked well together and completed in good time. We give special mention of how well that was done, thanks.

As I hope you can tell we are very pleased with the system we have had installed by Eco Installer. I think we all agree the Solar installation actually adds to the appearance of The Barn.”